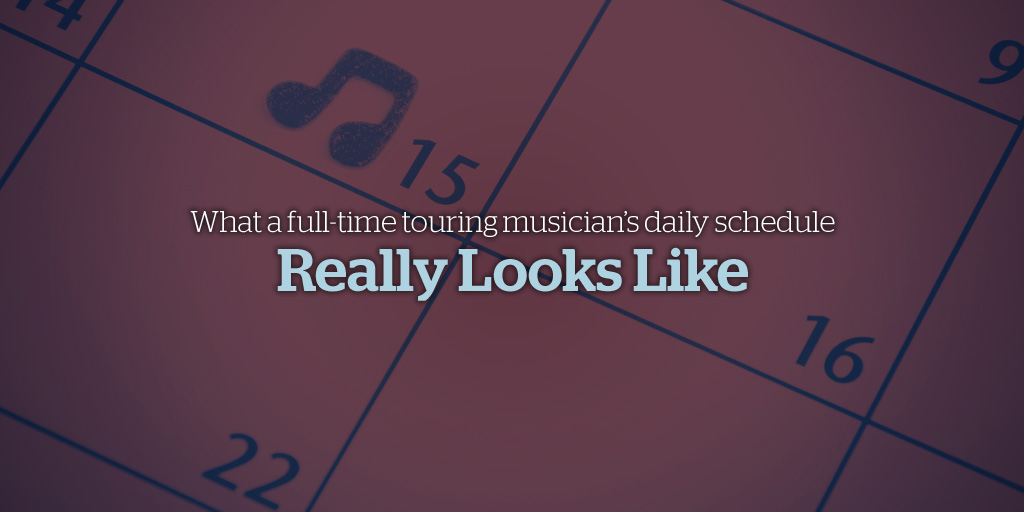 This is a guest post by Jhoni Jackson, which originally appeared on the Sonicbids Blog.

No two full-time musicians' schedules are identical. Depending on the projects they're involved in, the to-do lists will vary greatly. There are few better examples of an exceptional hustle, however, than that of Alex White, one-half of the heady garage-rock duo White Mystery. She and her brother Francis have been kickin' under that moniker for more than five years now, and in that time have put out four LPs, toured relentlessly around both North America and Europe, played huge festival gigs, been featured in promotional campaigns for Levi's and Converse and, just recently, even made a nutty, psychedelic rock 'n' roll film based on recent travels. And they've accomplished all of that in a completely DIY fashion.

"My life, physically, is like coffee, emails, working out, playing, sleeping. And some eating. But mostly coffee," Alex says.

We spoke with Alex to get an idea of a typical workday, but she couldn't give us just one. Below are loose accounts of her two schedules: one during a tour, the other during the off months, and each with some extra bits that are actually crucial to how she operates. New bands especially, I think, will find her efforts inspiring, and the actual nuts and bolts of it all quite illuminating. It won't work for everybody, of course, but it's certainly worked for White Mystery.

A typical day when not touring

7:30am: On a day like today, I wake up at like 7:30 in the morning. I get up, I make coffee – like six cups of coffee – and I sit down at my computer and open my inbox. I see what's in there while the coffee's brewing, make my bed, pour myself a cup, and sit down and start looking at my emails. I get almost 100 every day. I start answering them in order of easiest to answer to hardest, which may not be the best strategy, but that's how we do it because I kind of like to get those easy ones out.

1:00pm: I came home, and my three interns came over. They come at 1:00 p.m. every Monday, three Columbia College students. We learn a different discipline every week and apply it. I do so many things that I always have a project related to what we're talking about. Today with the group we focused on booking, and they have the option to call in or come in person.

3:00pm until late night: I take my dog for a walk, and then I work until, like, two in the morning answering the rest of the difficult emails, like contracts and stuff like that. Today it's 7:30 p.m. and we ordered a deep-dish, Chicago-style pizza.

What are those 100 or so emails about, actually?

It's a lot of organizing and planning, and the particulars shift based on the project at hand. Lately, a lot of Alex's work has been focused on making the band's movie, That Was Awesome, come to life.

"[What] took up a lot of my time was developing the film," she says. "Working with an editor and his questions and the filmmakers, who each have their own part, and then booking the premiere party for it. You're trying to cover a lot of ground by communicating with people."

Additionally, Alex points out something especially important about the way she fields emails: "I'm really thorough. There's a lot of people out there who get 100 emails, and they only answer maybe 10. But when there's a young band who emails me about how to play in Chicago or someone with a blog that wants to do an interview, I'm happy to do that stuff, even though it can muck up the [day] a little bit. The example that's really important to me is that more than 10 years ago, someone had emailed me about playing their parents' basement in New Jersey. It was my old band, Miss Alex White and the Red Orchestra, and we didn't tour that much so it wasn't [really a possibility], but I was like, 'Hey, thanks for the opportunity, but we're not on the road presently.' And that person ended up being [guitarist and vocalist] Marissa Paternoster of Screaming Females. [That was] the young teenager who emailed me at that time. And to this day she remembers that I replied to her."

The White siblings are famously positive and friendly, and in the independent music realm, that can truly pay off. She adds, "'Cause, you know, in a couple years that person...you might be opening for them."

So when do they practice, you ask?

"It's hard to practice, [because] even when we are home, we're usually playing twice a week, so a lot of times we just perform live and do a lot of our writing in that two-month period when we're home where we have access to our practice space and stuff like that. Usually when we're home, it's unplugged electric guitar and working on lyrics, then we kind of brings those songs to our live shows and kinda test them out live. Kind of organically that way," she says.

Tour schedule (about 10 months out of the year)

11:30am to noon: I open my laptop in a hotel, probably, and try to find coffee. Usually I don't have that luxury, and I find those little hotel coffee makers to be really disgusting. I never use those. Then I take a shower, wake Francis up at noon, and request a late check-out for 1:00 p.m., like, 'Hey, we're not ready yet.' (She says in a voice that implies they never intended to check out on time.)

1:00pm: We'll usually stop at Starbucks or something and hit the road. We're usually driving for three to six hours a day; we try to cap it at six and not do more than one of those weeks [a month], and we typically arrive at the venue around 7:00 p.m.

7:00pm until 3:00am: Even though a lot of places want us to load in early, it just didn't make sense to be at a bar for, like, seven hours when you're only performing for 45 minutes, so we kind of take our time. We'll arrive at the venue, and sometimes that's our first meal of the day at 7:00 p.m., because we're fueled by coffee and snacks. We set up our merch when we walk in the door, then basically play pinball until the doors open at 9:00 p.m., and man the merch table until the show, which is usually around 11:00 p.m. or midnight. And then we play, then we party until three in the morning.

Take note, however, that there are some details missing in that general overview.

Jhoni Jackson is an Atlanta-bred music journalist currently based in San Juan, Puerto Rico, where she juggles owning a venue called Club 77, freelance writing and, of course, going to the beach as often as possible.

Your band works hard to put on a great show. We work hard so you can make a great band website, easily and affordably. Build your own Bandzoogle website in minutes. Sign up free now!

Posted by jeff
sounds like an easy day. Lots of people put in long hours doing a job they hate. most of the stuff is daily normal living. we have to gas up. make sure the things we leave in our car are secure and safe.

Posted by Jon Hart
Man, I wish I used to have that day .... With 2 young kids (one is 8 weeks), 80-100 gigs a year (30 solo gigs and 40-50 weddings), guitar tuition, admin (LOTS of admin sending and answering), social media, travelling, writing, arranging, recording and general shiz - this is a real test of juggling and patience! This morning I had a baby in one arm whilst eating breakfast, answering emails and sorting out my toddler. I have to reheat ONE coffee up a few times in the microwave as I don't have time to make another. I have 5 min slots to practice and send emails / update social media / text agents etc when I have a split second. I'll look back on it one day and can be pleased that I beat the system where a lot of peeps tell you to get a real job or quit the music when you have a kids. That's just silly talk ?

Posted by Sodacon Music
Play, perform, record and get paid however you can. However some people also act like you're a musical loser if you have a day job and perform and record on the side too. That is simply not the case.

Posted by Fire on McGinnis
Uh, we would be excited to get even one e-mail message.

Posted by Song River
It's not an easy life, hustle. Great article depicting the multiple sides of it. Anyone who thinks this is an easy life is obviously glued to their cubicle chair, but hey we all choose!

Posted by Ted Pearce
wow, they get to go home that often?

Posted by whiskey kiss
For real, must be nice. We had 203 shows last year. It's January and we already have 60 in the books. I forgot what the word "rest" is.