Music Licensing 101: How do I license a cover song? 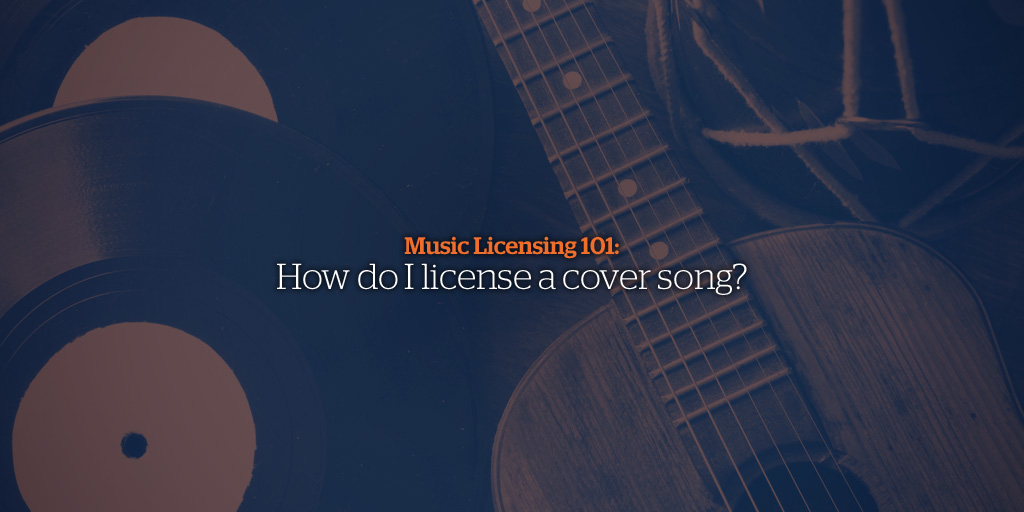 PRO, licensing, synchronization, royalties - learning the language of music publishing can be daunting. But it’s important to take advantage of all of the revenue streams available to you as a musician and songwriter!

In Part 1 of this series, we covered what a performing rights organization (PRO) is, what they do, and how they can collect royalties for your music. In Part 2, we talked about eight different royalties you can collect from your songs.

[Music Licensing 101: 8 royalties you can collect from your songs]

For the third post in this series, we’re taking a look at cover songs. Recording and performing cover songs are a great way to build your fanbase, but it’s important to do this legally to protect yourself from litigation. Plus, as a musician, you know it’s important that the rights holders and creators be recognized for their work!

When licensing covers that you’ll just offer for free online (streaming or download), you will still need to obtain a license so that the original songwriter(s) get paid.

When applying for a license, you’ll have to estimate how many downloads you’ll give away and streaming sites you’ll distribute the track to. Because streaming services like Spotify already pay licensing fees, you don’t have to cover them on your license. You would count services like Bandzoogle, Bandcamp, Soundcloud, and other similar sites.

[[VIDEO] How to Sell Bandcamp Music on Your Bandzoogle Website]

Including a cover song on your album

If you’re planning to release your own version of a song on your next album, you’ll need a mechanical license. These licenses pay 9.1 cents to the songwriter per download (or physical purchase of the album.)

One thing to keep in mind is that if you’d like to release two different versions of the same song (for example, a punk rock version and an EDM version of "My Girl"), you would need two separate licenses.

Since YouTube is a video platform, you would technically need a synchronization license to legally post a cover there. But because it’s so difficult for independent artists to get a response from large publishers, and would be even harder to negotiate a synch rate, YouTube just displays ads on cover videos and pays the revenue to writers. So, if you’re just going to release a cover song on YouTube but won’t be selling it, you don't need to obtain mechanical license. YouTube will simply pay royalties to the publishers from the monies collected through ads displayed on your video.

[How to make money from your music on YouTube]

Where do I get licenses for cover songs?

[How to Record and Release Cover Songs: An Interview with HFA]

We hope this helps you legally release covers of your favorite songs to share with your fans!

Making money as a musician is tough. That's why you keep 100% of your hard-earned revenues when you sell music, merch & tickets through your Bandzoogle website. Sign up free now!

Posted by Anonymous
Thanks For This Info

Posted by Brioni Faith
Thanks for this - does this apply for the US and rest of the world if you go through Loudr? I believe in Australia and other countries the laws are slightly different.

Posted by Big Hitter the Llama
You actually can get paid for youtube video covers but must sign up through https://www.wearethehits.com/ . I believe they are the only site with the proper rights to allow this without trying to get a license yourself. $ is split with publishers.

Posted by Infinite Journey - The Music of Journey
Thanks for the great info! I'd love more detail on the "Playing a cover on YouTube," on how to get ads on our videos? I'm wondering if this is the reason why all of our covers (we're a tribute band) keep getting pulled from YouTube? YouTube has pulled all of our posted videos (our promo video and three live-shot vids) and deleted our YouTube channel last year. Tried posting it six months after "anonymously" and got pulled again. YouTube has even reached out to some of our fans who have posted our videos (they shot on their phones) too. There a thousands of tribute bands out there who have videos on YouTube, so I just don't get it?

Posted by Desi Thorne
@Infinite Journey - The Music of Journey - if you don't have the proper licensing, it's certainly possible this is the reason the videos are being removed. In order to legally post videos to YouTube, you will need a synch license, which can be acquired from the PRO like BMI, ASCAP, or SESAC. It's possible that other tribute groups have these synch licenses in place, which would keep them from being taken down.

Posted by Cameron Gorham
Hey there @Steven Green's Swingreen! To clarify this a little further: YouTube cover videos are a really gray area to some extent. The article does cover this correctly as when ads are displayed, the fees are paid, and life goes on as normal. That being said, the person covering a song (technically) needs to get what's called a sync license from the publisher for the video. It's rare that people actually do this, because most publishers don't deal with indie level artists. All in all, if you're just releasing a cover song on YouTube and you're not selling it, you don't need to get the mechanical license because YouTube pays royalties directly to the publishers. Copyright stuff and licenses are a dense subject, but when it comes to covers, you really only need to get a license for is selling the song anywhere (iTunes, CD's, Bandzoogle, etc). I hope this helps!

Posted by Anonymous
I am still hoping to get played on Youtube with my tracks from Bandzoogle to actually sell my songs on there which is to no avail? I am in the process of negotiating (Supplying Performer Data) with both PPL (Phonographic Performance Limited) and PRS (Performing Right Society) I received through Paypal payment from my account to Bandzoogle. I would be very grateful if you enlighten me about selling my songs on Youtube plus other sites? Thank you, G.T.Mac and MOSSA-BAND:

Posted by Anonymous
What about if it is a video collage? Our problem is that we are a tribute group for Seattle music time period, and we cover about 5 bands in our promo vid. They are not full songs, and we are not selling the video. The clips are about 1 min each. Its just for promotion to get gigs. Why would it get pulled if the copyright notification states roughly that, "YouTube will simply pay royalties to the publishers from the monies collected through ads displayed on your video."

Posted by Julia Kater
Hey @ Smells Like Seattle, just sent you an email to reply to your comment. If you have any more questions about this, feel free to contact us through your 'Help' tab. Cheers!

Posted by Andrew
@ Smells Like Seattle TECHNICLLY and legally speaking you absolutely 100% can not put any kind of video together for a cover without proper licensing in place. You can't even put the song on YouTube with text underneath it without a proper license. 99% of the time a large artist isn't going to care as you can see based on the number of cover videos out there. However, in your case where you're a tribute band and earn income based on this particular artist I would be careful.

Posted by Brioni Faith
Hi again... if releasing a cover, what agency/publisher would be best to obtain a license for release and sitribution with the option of sync licensing in the US? I'm in Australia. Thanks for any help!

Posted by Rosalyn Jordan-MIlls
I'm a small company that has put together a concert using four songs that I will be using in movie video. I've been having the hardest time getting a response from Sony, Warner BMG and it's been very frustrating. What can I do to get a synch license to cover songs?

Posted by Christiana Loizu
Hi. I am a singer, recently won the Bulgarian X Factor. I would appreciate it if you could give me some information about covering songs. I would like to make some covers of pop songs and post them on Youtube. Do I need a license for this? I don't want to sell them, I just want to become more popular as an artist. What do you recommend me to do in this case? Thank you in advance.

Posted by Adam Percy
@Christiana Loizu - as mentioned above and in the article, even if posted for free, you would likely at the least, require proper sync licensing to post covers to Youtube. Licensing in general is a very dense subject, so your best bet is to contact your regional P.R.O. (Performance Rights Organization) for more information on this.

Posted by Liam
Hey. Say a band had a cover song on an album, and are paying royalties to the original songwriter. If they then record a live album with that cover song, is it the same or any different than the current arrangement?

Posted by Acir
Hi! Im from philippines. I also want to do music cover and post it on youtube...Does having mechanical license should be followed here in philippines? Where Can i get the license online?

Posted by Kilyle
I've been trying to get info on what to do when you want to use someone else's cover song in your video. There's a lovely cover of "Demons" by Imagine Dragons, which is sung by Neela Bhurtun, and I'd like to use it in a fanvid. I contacted her, and got the reply that they're okay with that, if I secure the proper rights so they don't get into trouble or get their video taken down. But I have no clue what the proper rights are! If this was just my cover, I'd post it on YouTube and let the YouTube machine handle the rights; if I were using the original song, it'd work almost the same way. YouTube has already negotiated these rights for me and it seems to be working well as a system that lets ad revenue go to the original songwriters or rights holders without giving them the bother of dealing with every tiny musician or vidder or hopeful on YouTube. There doesn't seem to be a precedent for using someone else's cover. And yeah, I can't get a reply from the rights holders, even when I try to find and contact the right one :( I used to be part of the fanvid community, and we'd fly under radar because there was little else we could do. Flying under the radar seems like a dangerous strategy now that I have an established YouTube channel -- and it bugs me that there's no easy, realistic, obvious way to handle the licensing to benefit all parties.

Posted by Brendon Wadey
@Kilyle I have responded to your comment through email. You can always contact us at support@bandzoogle.com