Shifting the Money Talk: 8 Pieces of Advice All Independent Musicians Need to Hear 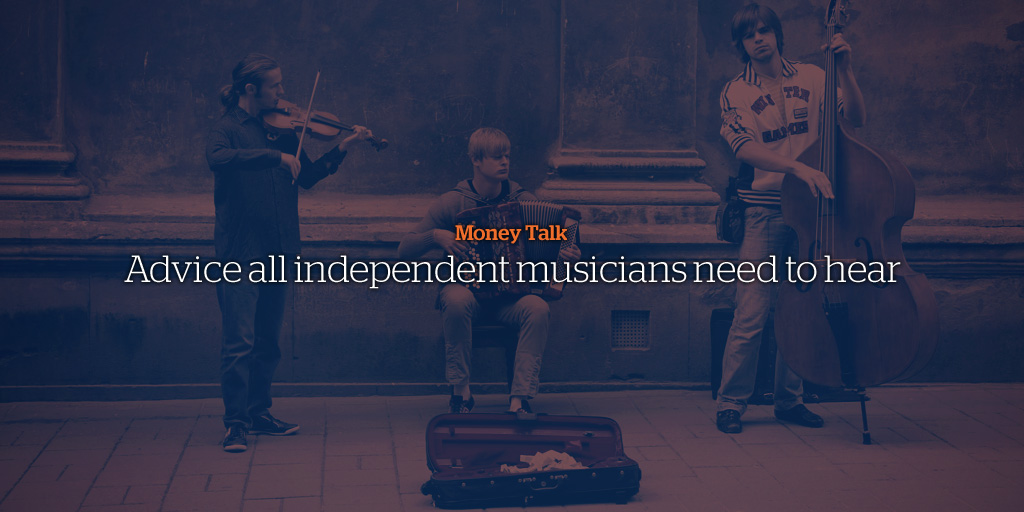 This article originally appeared on Living on Gigging.

Money. At times just the mere thought of it (managing it, finding it, and keeping it) can bring out the worst in me. As a touring musician, a singer/songwriter, and a freelance composer, I have struggled with my relationship with money and all the anxiety I let it breed in my life for quite a while. I decided that it's time for it to no longer get the best (or worst) of me. Here's how.

Of course it feels scarce on a personal level, but part of that is caused by a common social idea that there isn't enough for everyone to be rich and happy (and then that little voice kicks in, "…so why should I be the one to deserve it?"). Realize that there is enough of it to go around. I heard a great analogy once: money is like air. The more and more you try to preserve one breath, the less and less you can breathe. Let it flow in and out; there's enough for you and everyone else to do this for a lifetime.

2. If you're struggling with a budget, don't

Just keep track of every dime you spend. This has been the most useful advice I've ever been given. Kind of like when you're trying to lose weight and you keep a food diary – you think twice before eating that third cookie, knowing that you have to actually write it down and put it into existence in the world! For six years I used an excel sheet to categorize my spending (I have since moved on to Quickbooks), and I record every single dollar, from coffee to keyboards and Skittles to studio speakers. It's amazing how much less I spend just by recording my purchases.

[How to Create a Music Marketing Budget in 4 Simple Steps]

3. Figure out how much you need to live every month

This means rent, food, utilities, phone, paying off debt (not in big chunks but in one predictable, controlled amount), etc. Some people are very unaware of this number, and it's a good one to know.If you can manage to make just a little more than you need, you're on the track to saving and becoming financially free. Take away that feeling of being in the dark by figuring this out ASAP.

Get rid of the story in your head: "I'm not making enough money to save yet." Or, "I have too many credit cards/school loans/other debts to save." Set aside a percentage of your income every single month (I'd start at five percent and increase it in six months if you're able) to go into a savings account. I actually have several accounts that I split small amounts (usually five percent of my monthly income) into – one for long-term spending (for bigger purchases like furniture or gear), one for retirement savings that will eventually go into my IRA account (if you don't have one, head into any full bank branch and ask to talk to a financial advisor – most banks like Citi, Chase, and Bank of America have this service and offer it for free), and one account for education and gifts (so I don't need to pull from my necessities, spending, or savings accounts when the holiday or wedding season comes around, or I decide to take a class). It adds up over time. Give it a whirl.

Credit card companies want your business. Especially if you've been with them for a while. Every six months, call the number on the back of your card and ask them to lower your rate. I do this religiously twice a year. I usually get the rates down by at least one percent. But if you've never tried, you could get a lot more! I recently told a friend about this and she got her rate from 18 percent to eight percent! And like I said in number three, plan to pay off your debt by setting a monthly payment (slightly higher than the minimum), pay that every month, and then stop worrying about it.

6. Don't spend what you don’t have

Especially if number five is interesting to you, if you don't have it in your bank account, don't spend it with a credit card, unless you're planning to pay it off immediately. The lack of immediate impact is a dangerous trap when "buy now, pay later" offers haunt us everywhere. Be strong and resist!

7. Look outside the box for income, and be okay with it

Every once in a while you may need to take that babysitting gig, teach a semester of piano lessons, bartend, wait tables, or go scuba diving for mussels for a government research project (true story). It's okay. Cut yourself some slack and do what you need to do.

The biggest thing I have learned about money is that it shows up when you need it, as long as you're working hard and doing what you know to be doing (which includes number six). It's tough as a musician having lots of costs and unpredictable sources of income. But worrying about it doesn't help. Anxiety wastes energy. Take in that breath and let it flow.

Everyone has a different money situation, so this list is merely a guideline that you can use. Mold and cater to your personal needs.

Cheryl B. Engelhardt founded CBE Music, a music creation and sonic branding firm, and has produced her own piano pop records, toured around the globe, has had dozens of TV placements and scored multiple films and commercials. Passionate about supporting musicians, Cheryl hosts popular workshops, video trainings, and other valuable resources on her website, In The Key Of Success. Get her free PDF for insider tips on how to make it in the music biz.

Bandzoogle lets you create a professional website in minutes with all the music promotional features you need including a blog, mailing list, and social media integrations. Try Bandzoogle free now!

Posted by Mike
I always recommend bands opening a joint bank account. Use that money they gain from shows and selling merchandise and put it in that account. The money in that account should be for studio time, restocking inventory (such as business cards and merchandise), gas, food, hotels, gear upgrade or repair. Every band member should have some kind of a part time or full time job. The money you get from work keep 100% and put it towards personal expenses of course. Or if you're feeling very generous put !5-20% of your paycheck and put it towards "the band fund."

Posted by Pamela Thomas-Martin
Some of us do not work "jobs" because it takes too much time away from our work. I'm not getting rich but I make better money playing music than I would at any job. Even without a "job" I feel like I will never be caught up with everything I need to be doing for my music. If I had to work a job too I wouldn't be able todo half of what I do now. Sure sounds good though just not practicle if you are serious about your craft.

Posted by ruffdog
As a independent musician how do I get a finicial sponsor.I wanna shoot a music video please advice